A love triangle. A historic hurricane. A marriage for money, and the ultimate betrayal. Who knew life was so glamorous in 1938? 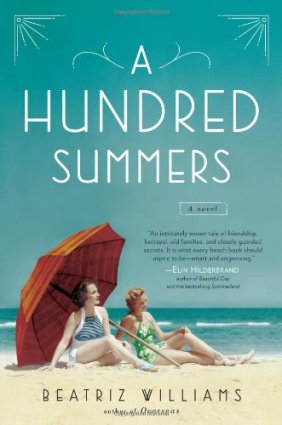 Socialite Lily Dane is looking forward to spending another summer with her family at idyllic Seaview, Rhode Island in 1938. The small seaside community may be a little too quiet for some, but Lily enjoys the escape from the hustle and bustle of the New York social scene. Then her former best friend (Budgie) shows up with her former fiancé (Nick) in tow, and the summer promises to be anything but quiet.

As tensions mount, the truth begins to slowly emerge about why Budgie and Nick married, and how Graham Pendleton, Nick’s former teammate and current Yankees pitcher, fits into the mix. As if the scandal and intrigue aren’t enough, the New England Hurricane of 1938 storms into everyone’s lives and forever alters the future.

“Summer of 1938: A scandalous love triangle and a famous hurricane converge in a New England beach community. Add in a betrayal between friends, a marriage for money, and a Yankee pitcher, and it’s a perfect storm.” —Good Housekeeping

I finished this novel as summer came to an unofficial end over Labor Day weekend, a time that usually makes me a little sad. Summer is my favorite time of the year, and I always dread as we move into fall, only because I know what lies behind for us Northeast Ohioans — the fury of winter.

It’s always fun to explore different time periods and social classes, and I began to think about the concept of ‘summering.’

Does your family ‘summer?’

Or do you have a tradition of taking vacations together?

What is your favorite summer or vacation memory?

p.s. Summer doesn’t officially end until September 22nd, so you still have time for a good beach read!

If only life was a never-ending summer…

Wishing I was a socialite,
Jaime

4 thoughts on “If Only Life Were A Never-Ending Summer…”